Starting a Nonprofit 3: How to Find a Co-Founder 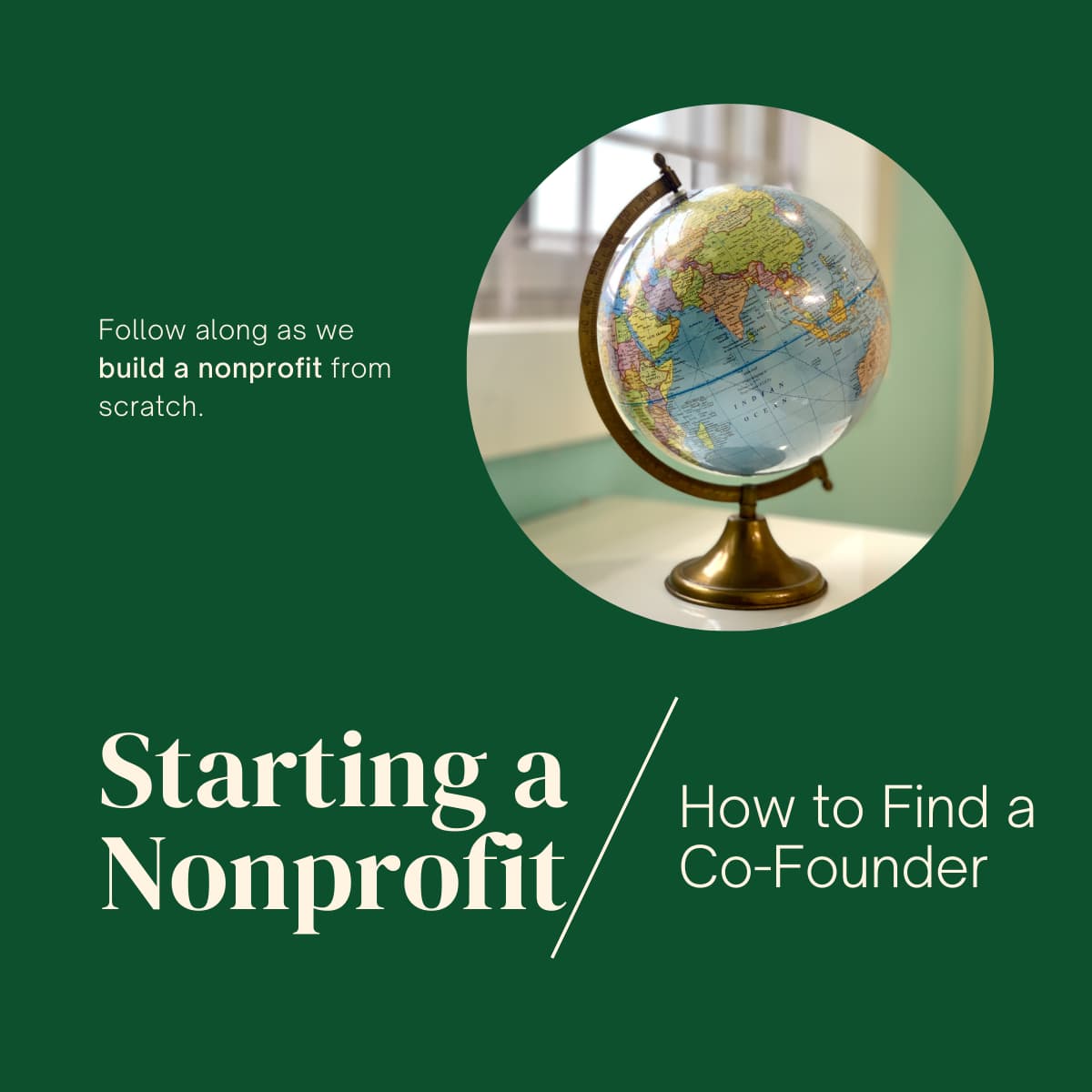 Welcome back to the series. In this article, we will be covering how the project went from being a one-man show to a four-person operation.

If you are wondering how we got to this point, then you can start from the beginning of the series, here or you can browse through all published articles here. Otherwise, let me tell you how I found a team for the project, how I pitched the project, and how a stroke of luck was part of the equation.

Why Should You Find a Co-Founder?

In the last episode, we established that creating the nonprofit would be too big a task for me to take on alone. I am sure it could be done alone but I think it would have been less fun and much more difficult.

A simple benefit of one or more co-founders is of course that you can split up your work and progress faster. So with one co-founder, I should theoretically be able to achieve twice as much in the same amount of time.

However, I think the actual benefits are far far greater than that: Hopefully, your co-founders are smart (ideally, smarter than you), so you can bounce ideas back and forth and come up with better solutions, faster than you could alone.

They also will have skills that you don’t have and as such you increase the pool of options available for you early on.

Even if you have similar skills, you can split up the work and specialise in different areas, possibly resulting in better decisions. There’s also a degree of social responsibility by holding each other accountable for showing up and delivering what you agreed upon in time.

Then there are second and third order consequences, such as improving your personal network. It will improve by expanding as you will be introduced to new people, but it will also improve in quality in the longer term. What I mean is that since your acquaintances are now “co-founders” they will benefit in life by learning from the experiences, and by benefitting from the title in future jobs and opportunities.

Why Shouldn’t You Find a Co-Founder?

I also wanted to touch on when finding a co-founder might not be a good idea, or at least what the downsides could be.

The first danger is conflicts. Disagreements and conflicts can stem from pretty much anything, and can be on anything such as which direction to take the nonprofit in, how quickly to scale, where to find funding, how much, and when to find it?

There’s also more bureaucracy. As an example that I will be writing about soon, something as simple as setting up a bank account requires more signatures than if you do it alone. Another thing is time spent on meetings.

I am sure there are other reasons as to why you should hold out on finding a co-founder, however, I think it is still very worthwhile to do. So with that in mind …

How do You Approach Someone to be a Co-Founder?

In my case, I could immediately think of one person in my personal network who was obvious to ask. This was someone with similar interests, technical skills, and just a general no-bullshit, get things done kind of guy.

On top of that, he had previously set out to register the most effective charities in the world for tax benefits in Denmark. One at a time.

I thought this was perfect: Here was someone working on the same problem as I was, and I had (at least I thought I had) a better solution to the problem.

I immediately sent him a very informal message explaining the idea as briefly as I could and asking if he was interested in joining the project (In hindsight, all of this was probably a bit too hasty). Here’s his (translated) reply :

“Hey! I have thought of that too! There are several reasons for why this idea might not be possible.”

“Ouch”, I thought. Maybe the whole idea is just stupid. Here is someone who has clearly spent more time thinking about this than I, and they came to a different solution. Clearly, I overlooked something super simple.

However, he came back and followed up with this: “However, I think it is an idea that frequently should be reconsidered. Let’s have a meeting to discuss if it is possible.”

And we did. And it went well. We both seemed aligned when it came to what we wanted to achieve and how we wanted to do it. So with no more work than that, I finally had a co-founder. It’s going to be nice to be able to write ‘we’ rather than ‘I’ as it really makes me feel uncomfortable to share so much about what ‘I’ do.

In the talk, we discussed the following: Why is this a worthwhile project? Is it achievable? How can it be achieved? Are we excited about this? What should we do next?

How we Went From Two to Four Co-Founders

In the meeting, we were struggling a bit with the last one: What do we do from here? We agreed that it would probably be a good idea to reach out to the Norwegian nonprofit that had also done what we set out to do.

They were very transparent and had already published all their financial details online, so we didn’t need to ask questions about that.

Part of what they answered was hugely surprising. The Norwegian nonprofit had recently been approached by a guy from Denmark, asking them largely the same questions: “Could they help him set up a nonprofit in Denmark?”. They suggested we should write him, and we managed to get a zoom meeting set up. He was a UX consultant with a passion for effective charities, trying to set up a charity in Denmark. We were essentially all working on the same problem, trying to solve it in the same way. After realising that, and seeing that we all got along really well, we decided to join forces, and so we went from two to three co-founders.

How did we find the fourth guy? Well, that was again a more random encounter. The first co-founder had a friend who had previously asked if he needed help with any of his projects. So all it took was him reaching out, mentioning that he had a new project in the works and we had the fourth guy on board.

If I had to distill what I have learned since the last time, then my (very brief) experience is that it is easy to rally people to work for a common cause. I feel a little bit as I imagine Derek Sivers felt starting CDBaby. He didn’t want to start a big company. But people (customers) just kept coming and he kept expanding to serve those customers, building a giant company in the meantime, almost by accident.

I know this experience is definitely not the same, and I haven’t really built anything yet, but I have in the past tried to find co-founders for commercial projects and the difference is staggering.

Another example has been the response to me posting these posts on Reddit. Immediately people have reached out asking how they can help out, how they can get involved, and what they can help with. If I had known I would get such a response I would have been better prepared, because the truth is I didn’t know what I needed help with so far.

Thanks for reading this far, I hope you have enjoyed the post and maybe learn’t something in the meantime. Look forward to our next post on building an MVP.

Starting a Nonprofit 4: What should your MVP look like?

Hi friends, and welcome back to the series. In this article we will be covering how we decided what to include in our Minimum Viable Product (MVP). You will see how we got there, what features didn't make the cut and what we learned in the process. If you are...

The Starting a Nonprofit Series

Starting a Nonprofit 2: How to Effectively Contribute to a Cause

Welcome back to the series. In this article, we will cover a possible way to make all of the world's most effective charities (current and future...) eligible for tax-benefits in Denmark.  If you are wondering why I am interested in doing this, then you can start from...

Starting a Nonprofit 1: What to Work on and Why?

Did You Enjoy This?

Then consider joining my weekly(ish) newsletter. Every Sunday I share actionable productivity tips, practical life advice, curated content and high-quality insights from across the web, directly to your inbox.

You have Successfully Subscribed!