Starting a Nonprofit 2: How to Effectively Contribute to a Cause 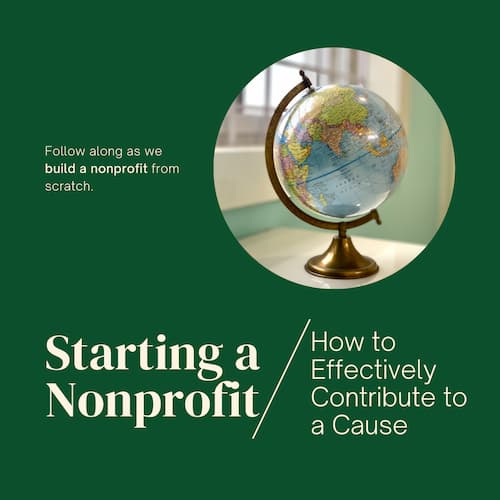 Welcome back to the series. In this article, we will cover a possible way to make all of the world’s most effective charities (current and future…) eligible for tax-benefits in Denmark.

If you are wondering why I am interested in doing this, then you can start from the beginning of the series, here. Otherwise, sit back and let me tell you where this idea came from, what the idea exactly is and how it could become reality.

Of course, this quickly turns into a dead-end of trying to evaluate infinite options against each other and the idea ends up dying from analysis paralysis*.* So, rather than trying to create the best solution I decided to start with just any solution. That way, I could have a benchmark for comparing any future ideas against.

A Framework For Getting Started

So what did I do next? First, I figured that there are two parts to my cause:

(which, in case you don’t remember, is, “How can we get Danish people to give more money to effective charities?”)

One part is figuring out what charities are the most effective, and the other part is to figure out how to increase donations from Danish people to those charities.

The first part is in itself a huge task that I am certainly not up for taking on alone. So I didn’t. Instead I looked to GiveWell.org, who write on their website:

“We search for the charities that save or improve lives the most per dollar.”

I was already familiar with their work and I respect it enormously. So for solving part one, I was pretty much done. I wanted to rely on recommendations from GiveWell.

The second part however might require a bit more work. How do I get Danish people to give more money to the effective charities selected by GiveWell?

A Promising Way to Increase Donations

So what did I do? Again, I looked elsewhere. I tried to find someone who had already worked on something similar. And what did I find? I found gieffektivt.no.

And what is this? Well, gieffektivt.no is a Norwegian website that collects donations for GiveWell recommended charities and then funnels them to those charities. But what incentives do Norwegians have to give to the Norwegian organization rather than the charities themselves? Surely, there would be lower transactional fees associated with donating directly. So what was it?

People who gave money to the Norwegian organization could write off some of their donations in their taxes.

I thought this was brilliant! It is not that paying taxes is a bad thing (not at all), but rather that the playing feel was not level. Huge international organizations had the means to register themselves for tax-benefits in Norway, but smaller organizations probably neither had the means nor were they probably even aware that it was something they could do.

On top of this, it turns out that added fees might not be that big of a problem. Why? Because every donation from Norway involves an exchange of currency from Norwegian kroner to dollars or euros. As such, every donation loses a tiny bit of its value due to fees. However, with a larger, batched donation, you can get better rates in the currency exchange. The same goes for transaction fees that are either flat or have a minimum fee, such as international bank transfers.

The more I read, the more I knew that this is what I wanted to do, too!

The part I like the most is that it can make donations to all of the world’s most effective charities eligible for tax benefits at once. No need to register each with the authorities individually. The same goes for when GiveWell changes their recommendations: New charities will from day one be able to play on the same playing field (in Denmark) as the largest charities do.

Now that I had an idea for how to go about it – How do I do it then? I know that it would require an organization that is registered for tax benefits in Denmark. So how do you do that? It would also require the capacity to receive donations. So how do you bo that? And then how do you get traffic to your site? How do you get people to trust you with their money?

There is still a lot to do. Much more than I can effectively do alone.

As such I have decided that I will need help from one or more co-founders. But rather than cover that in this episode, I will let that be the topic for the next episode. All I will say for now is that, as I pitched the idea to one potential co-founder, his response put me back at square one with this phrase:

Starting a Nonprofit 4: What should your MVP look like?

Hi friends, and welcome back to the series. In this article we will be covering how we decided what to include in our Minimum Viable Product (MVP). You will see how we got there, what features didn't make the cut and what we learned in the process. If you are...

Starting a Nonprofit 3: How to Find a Co-Founder

Welcome back to the series. In this article, we will be covering how the project went from being a one-man show to a four-person operation. If you are wondering how we got to this point, then you can start from the beginning of the series, here or you can browse...

The Starting a Nonprofit Series

Starting a Nonprofit 1: What to Work on and Why?

Did You Enjoy This?

Then consider joining my weekly(ish) newsletter. Every Sunday I share actionable productivity tips, practical life advice, curated content and high-quality insights from across the web, directly to your inbox.

You have Successfully Subscribed!